Beyond the one child policy: experiencing China for the first time (Part 1/3)

It’s been that time of year again when my rucksack came down off the top of the wardrobe and I bought 2 packets of shortbread fingers (they travel whatever the climate) as emergency rations and headed off to experience somewhere new. This year I went to Hong Kong and China for a whistle-stop tour of the ‘highlights’.  Every year I teach about the one (then two) child policy and how China is the manufacturing centre of global trade as that’s what the textbooks tell us so was looking forward to seeing what China, as a tourist destination, is really like.  I was under no illusions that I’d get a real flavour of the ‘authentic China’ but I was hoping for a little more insight into this great country other than its large population and Peking duck! 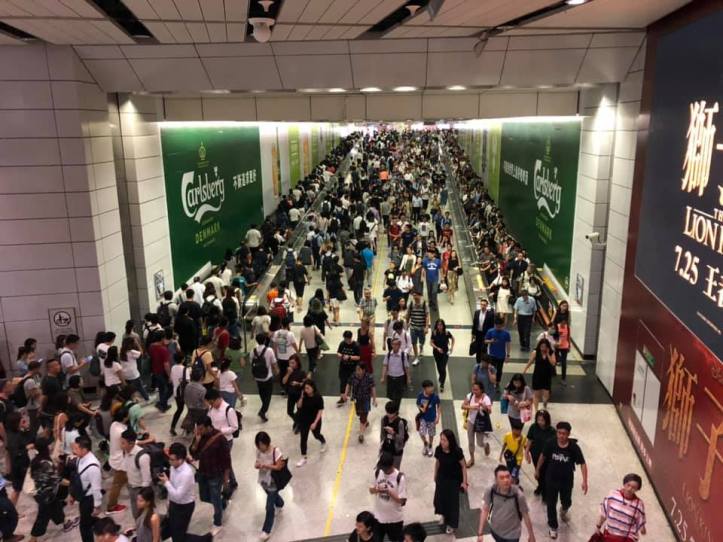 Any trip to China starts with a trip to the Visa Centre in London or Manchester and the stereotype of Chinese t-crossing and I-dotting bureaucracy is apparent from the start – but I sort of liked that it means they don’t let anyone in and it added to the anticipation and excitement if my upcoming trip!  After filling in the very long online form and getting my white background passport photo photoshopped to make the background even whiter, I printed it and headed down to the Visa Centre in London on a Thursday morning in mid-June.  After numerous document checks (there’s a lot of paper to print and take) you get your first ticket to wait to be called to a counter and then you get another number to wait to pay.  An hour and a bit later you walk out having left half the paperwork and your passport behind with the hope it’ll arrive back at your house with a visa is in before you leave.  A week later and my passport complete with visa arrived in the post but not before I’d become a bit obsessive about logging into the online tracking website to be repeatedly told the has no record of my name or passport or visa application.

Fast forward just over a month and I arrived in Hong Kong early on a Friday morning.  Wandering the shopping centre and local streets to the hotel while waiting to check in, I was surprised to find most places shut at 9am on a weekday and it took a little while to find somewhere other than Starbucks or KFC that was open – for a global financial hub this just seemed odd but thinking about it I wish the UK would consider 10am-10pm opening hours for shops so people can go mid-week around work.

Breakfast, nap and shower later we headed out to Hong Kong Island on the MTR for a nighttime cruise round the harbour.  The MTR seemed, as I expected, highly efficient with posters and announcements regularly reminding you how to act – no eating or drinking, many warnings to stand clear of the doors, reminders about fares – and single fares loaded onto single use yet reusable tickets.  Arriving at Central on Hong Kong Island you hit the Hong Kong we see at home. Bright banners put the names of transnational corporations in lights on the top of buildings.  Glass shines as the skyscrapers seem to never stop when you look up. The international Finance Centre glistens and seems to drip money as the flagship Apple store rubs shoulders with designer labels.  Except for the iconic skyline on either side of the water you could be in any downtown area of any global city -and finding somewhere to eat before the boat ride inevitably meant Mcdonalds!

Taking the Star Ferry harbour cruise from pier 7 is seen as a must do when in Hong Kong and we headed out into the water on the night time cruise.  The breeze on the water broke the still intense heat and humidity that it was taking a little getting re-accustomed to and was a definitive highlight of my time in Hong Kong (which says a lot for someone who dislikes boats as much as I do) and the iconic skyline is at its best when lit up.

On our second day we headed down to Kowloon to walk along the front and take the ‘normal’ passenger Star Ferry on its 15 minute trip across to Hong Kong Island.  The ferry is definitely the best way to see the skyline but the view during the day was a bit of an anti-climax after seeing it all lit up in the dark the night before.  Once alighting the boat at central we walked up to take the funicular tram to Victoria Peak – another Hong Kong must do and I have to admit the view over Hong Kong Island, the harbour and Kowloon skyline is spectacular.  This is full on tourist central with restaurants, coffee shops, designer outlets, the Bubba Gump Shrimp Restaurant and shop, backgrounds of iconic places for selfies against and Madame Tussaud’s and that’s just in the first building you come to! Outside, along with many other activities, you can dine at Gordon Ramsey’s!

Back in the business district we headed to the Hong Kong Museum of History for a break from the heat in the air con and to learn a bit more about Hong Kong before walking up to the night market on Temple Street to check out the stalls and find dinner.  This was the first real glimpse of a different every day side of Hong Kong and, was probably more what I expected from other travels in South East Asia.  Market stalls down the middle of streets sell anything and everything from slightly misnamed ‘Supreme’ bags to electronic fans and more slogan T-shirts than I thought possible.  The streets themselves are lined with shops and services advertised with bright neon flashing lights and with clothes hanging from lines outside the apartments above. This is a world away from the faceless business centre and it finally felt like I was in Asia not Westfield Stratford!

Day three and it was time to cross the border into China. I’d really enjoyed my time in Hong Kong but I’ll be honest and say I think Singapore and KL are both more distinctive and I didn’t really get a sense of what makes Hong Kong Hong Kong.

Leaving the hotel we transferred by bus to an MTR station two stops from the border and passed through border control out of Hong Kong via the e-check booths so great disappointment at no entry or exit stamp in my passport to show I’d been.  Walking through the duty free area we walked through to the Chinese border and, two sets of electronic fingerprints (my thumbs were an 86% match for the thumb prints they’d taken at the visa centre in London) to confirm my identify later, we crossed into China.

Without really leaving the building we entered Shenzhen rail station, long designation departure lounge.  This marked the first of my ‘I didn’t expect it to be like this’ moment.  Having been in train stations in Europe, Asia and Africa before they’ve always been chaotic places, with waiting rooms packed and not a seat to be found (in England most train stations rarely have any seats other than an odd bench in the platform) and with frequent reminders from our guide while we’d been in Hong Kong that there are 1.4 billion people in China, I expected mayhem.  But instead I found incredible organisation from only letting ticket holders into the station to specific areas by destination to rows and rows of seats to people lining up in an orderly fashion when the train is called.  In London you don’t get such order when you’re at Kings Cross and the 4:45pm train to X is announced as boarding – it’s elbows out time as it’s a free for all! There were, however, some noticeable differences in luggage as it’s not often you see buckets used as suitcases or a lady using a bamboo stick over the shoulder to carry multiple bags.

Boarding the 12 hour train to Guilin we were in the hard sleeper berths – triple tier bunks open to the corridor as seen on Race Across the World.  The usual stream of snack and drinks carts go back and forwards with children running up and down the carriage counting the number of western people on the bottom bunks – as our group was along the bottom row – which seemed to be causing great hilarity.  People sat on the fold down chairs in the corridor area eating noodles and chastising their children for not going to sleep (the facial expressions, gestures, tone and inevitable confiscation of the mobile phone meant no translation needed). Out of the window the high rise blocks, some shimmering glass and others beige and grey concrete blocks, some seemingly abandoned half built and others sporting drying clothes out if every window seem to go forever with what little green space there is taken up with allotments.  We passed what seemed to be huge shopping plazas and massive factory warehouses.  And in the little space unoccupied by buildings, cranes indicate more are to come.

It is at this point, as the sun goes down and the train lights don’t seem to quite make it to the bottom bunks that my first blog for this trip comes to an end.  I still need to brave the train toilets and there’s about another 9 hours to see if I can sleep on my hard sleeper berth but there is still a man walking up and down singing songs and trying to sell what looks like sweets (may be pruned?!?) so I think this is definitely a case of a train journey, and the rest of my travels, to be continued…

Note: with thanks to Explore and their Highlights of China tour (see http://www.explore.co.uk for a wide range of different itineraries and tours throughout the region).